He asked her "kiss me", and she leaned tenderly over his bed.
This Kiss.
after peanuts on the bench
after vermut and r&r parties
after protests and labor
after building houses and taking down walls
after dreams and failures
after divorce and realizations
after lies and truths
after life
and death

to serve and protect 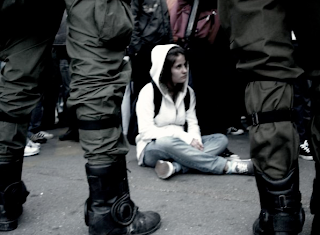 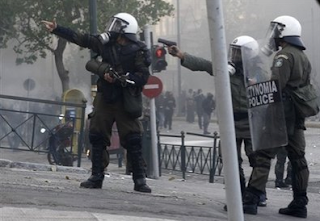 In Arendt's own words:

The end of human action, as distinct from the end products of fabrication, can never be reliably predicted. The means used to achieve political goals are more often than not of greater relevance to the future world than the intended goals.

[T]here are, indeed, few things more that are more frightening than the steadily increasing prestige of scientifically minded brain trusters in the councils of government during the last decades [the 1950s and '60s] ... they reckon with the consequences of certain hypothetically assumed constellations without, however, being able to test their hypotheses against actual occurrences.

Arendt writes that it is "a rather sad reflection on the present state of political science that our terminology does not distinguish among such key words as power, strength, force, authority, and, finally, violence - all of which refer to distinct, different phenomena and would hardly exist unless they did." She makes the distinctions:

Power corresponds to the human ability not just to act but to act in concert. Power is never the property of an individual; it belongs to a group and remains in existence only so long as the group keeps together.

Strength unequivocally designates something in the singular ...

Force ... should be reserved, in terminological language, for the "forces of nature" or the "force of circumstances," that is, to indicate the energy released by physical or social movements.

Authority can be vested in persons - there is such a thing as personal authority, as for instance, in the relation between parent and child, between teacher and pupil - or it can be vested in offices, as, for instance, in the Roman senate or in the hierarchical offices of the Church. (A priest can grant valid absolution even though he is drunk.) Its hallmark is unquestioning recognition by those who are asked to obey; neither coercion nor persuasion is needed.

Violence , finally, as I have said, is distinguished by its instrumental character. Phenomenologically, it is close to strength, since the implements of violence, like all other tools, are designed and used for the purpose of multiplying natural strength...

"Violence," she writes, "can always destroy power. Out of the barrel of a gun grows the most effective command, resulting in the most instant and perfect obedience. What never can grow out of it [violence] is power." [For example, violence and threat of violence by the emperors Caligula and Nero did not enhance their power. It diminished their power.]

Arendt writes that "In a head-on clash between violence and power, the outcome is hardly in doubt" - as in a military against collective non-violent resistance (power). But, she adds, "Nowhere is the self-defeating factor in the victory of violence over power more evident than in the use of terror to maintain domination, about whose weird successes and eventual failures we know perhaps more than any generation before us."

Sartre with his great felicity with words has given expression to the new faith. "Violence," he now believes, on the strength of Fanon's book, "like Achilles' lance, can heal the wounds it has inflicted." If this were true, revenge would be the cure-all for most of our ills.

The rarity of slave rebellions and of uprisings among the disinherited and downtrodden is notorious; on the few occasions when they occurred it was precisely "mad fury' that turned dreams into nightmares for everybody. In no case, as far as I know, was the force of these "volcanic" outbursts, in Sartre's words, "equal to that of the pressure put on them."

In the third part of her book, pages 59 through 87, she describes her discomfort with social scientists trying "to solve the riddle of 'aggressiveness' in human behavior." She asks why we should ask humans to take their "standards of behavior from another animal species."

Under some conditions, writes Arendt, rage and violence are justified. Violence inspired by a short-term goal can be rational. The absence of emotions neither causes nor promotes rationality. "Detachment and equanimity" in view of "unbearable tragedy" can indeed be "terrifying." Violence, she writes, "...is rational to the extent that it is effective in reaching the end that must justify it. But, she adds, "we never know with any certainty the eventual consequences of what we are doing."

She is not saying that people should always refrain from taking a chance. But she warns that with violence there is a danger that the means will overwhelm the end.
Posted by xtina at 15:34 1 comment:

Yesterday was a million years ago