a bell and a porticus 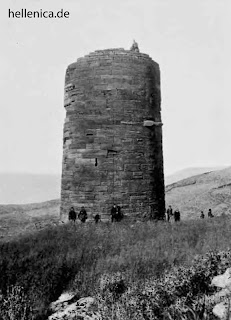 At first, men talked to each other, beat on drums and drew pictures. Then they erected buildings and built roads. They walked from town to town and from city to city relating the latest news. They wrote letters, scrolls, books. They trained horses to carry them faster than they could walk and they built boats to carry them further than they could swim. And then, for several thousand years of civilized history, while literature, architecture, art, warfare. physics, chemistry, medicine and the whole multitude of human technological achievement advanced, retreated and advanced again, the techniques of communication remained static. A message moved only as fast as the fastest horse and carried only as far as the eye could see.

Then, in 1753, the barrier was broken. Unfortunately for the memory of the person who accomplished this, he will remain known to history only by the initials "C.M." with which he signed a letter written to the Scotch Times describing a wonderful idea. He described an electric telegraph based on static electricity. The movement of "electric balls attached to the ends of a set of wires corresponding to the letters of the alphabet" would, the writer felt, improve the sending of messages from place to place. C.M.'s letter was published and was followed by a 50-year silence.
The reason for the silence was that static electricity is too limited to be effective in telegraphy, a fact apparently recognized but not verbalized at the time. Not until people like Volta, Ampere, Oersted and Faraday came along to develop and demonstrate electrical theory could the telegraph be invented. At the time of C.M.'s letter, the only thing really known about electricity was that amber-and certain other materials called "electricals" from the Greek word for amber, elecktron - could be charged by rubbing it.
While Volta and his peers were at work unraveling the mysteries of electricity, another development appeared. This was the last flowering of the mechanical, or visual, telegraph. The visual telegraph traced its ancestry back to smoke signals and hilltop bonfires and the towers used by Egyptians and Romans to pass information along. Visual telegraphy reached its highest development in France during and following the French Revolution. A weakened France, surrounded by her enemies, was saved because the enemies - the English, the Spanish, the Dutch, the Germans and the Italians - could not communicate with each other. Within France, however, a series of visual telegraph towers, designed by Claude Chappe, was built between cities to carry news and unify the revolution-torn country. By 1852, when the electric telegraph finally caught up with and passed it, the Chappe system in France covered a total distance of more than 3,000 miles and used a total of 556 telegraph towers with various semaphore arms for complicated messages.
http://www.porticus.org/bell/capsule_bell_system.html
Posted by xtina at 12:32 1 comment: 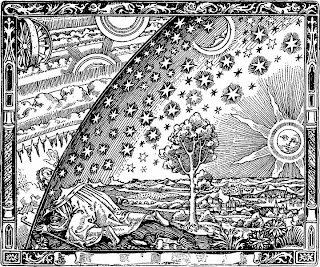 "Better doubt of things concealed,
than to contend about uncertainties"
Augustine

Children of the Brain

Look, what thy memory cannot contain
Commit to these waste blanks, and thou shall find
Those children nursed, delivered from thy brain
To take a new acquaintance from thy mind

W.Shakespeare
Posted by xtina at 13:00 2 comments:

[...] The lie of the contemporary world is not a lie in the subjective sense, in the sense of the sin of the subject, this lie is the expression of a profound degeneration of the structure of consciousness. From the world ever moreso disappears the personal conscience and all the less is heard its voice. But this does not mean, that in general conscience vanishes, it but alters its character. The collective consciousness has crystallised with such power and in such proportions, that it completely smothers within man the personal conscience. Man is forced into the lie in the name of this or some other understanding of the collective welfare. The lie to a remarkable degree is the manifestation of the social order. Man lies primarily to an other and to others. And even when man lies to himself, then he does this, having others in view both consciously and unconsciously. Man plays out a role before himself, so as then later to play out this role before others. The dictator is always a man inwardly an incorrigible liar, but this lying defines his role afront the world. The social attitudes of people are filled not only by the evil lie, begotten of the will to power, but also by the innocent conditional lie. The innocent conditional lie can be the condition for the possibility of human living-together. Thus, for example, a man might polite with another man, whom he despises to the bottom of his soul. The lie is wrought by evil, when there is the will towards domination and might, not personal only, but collective also, in what it cannot realise of itself. The will to power can be particular to an individual, but it always bears a social character. The “super man” of Nietsche unfailingly must find himself in social acts. But these social acts unfailingly demand the lie. The will to power cannot be realised otherwise, than with the assist of the lie. Christ spoke with power, and in Him only was the pure truth. Caesar, the dictator, can find power only with the help of the lie. Without the lie can be realised only the feeling of freedom. Freedom is a principle, contrary to lie. And the authentic liberation of man is a liberation from the domination of the lie. The extent of the lie in the world defines itself by the manifestation of a centralising collective consciousness, sustaining the will to power. To this ought to be opposed the heroic struggle for the freedom of the spirit, i.e. for the truth, the unmasked lie. Not at all does this mean individualism. Man is a communitarian being. The struggle cannot be directed against the creation of a new society, of a new communality of people. But truth always means, that spirit defines society, whereas the lie signifies, that society defines spirit. The new society cannot be created by diplomacy, i.e. by adaption to the condition of the world. The world is so full of the lie, the lie is so corrosive to the supreme human ideas, that by the unique powers of the world, by which everything is relativised, it is impossible to conquer the lie. Faith in the victory over the lie presupposes faith in the existence of a power exalted above the world, of the power of a Truth over the world, i.e. God. Even if all the world be infected by the lie, then all the same there is the Truth, pure from every blemish of lie, and in the struggle against the lie we ought to unite with this Truth. The personal conscience defines our relationship to this utmost Power -- the Truth, but this is not only a conscience, isolated from other people, this is a conscience, pervaded by the sense of the spiritual brotherhood of people, a brotherhood in the Truth, and not in the lie. 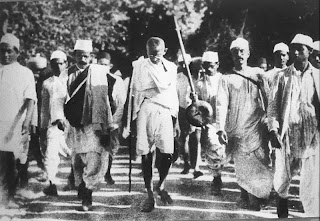